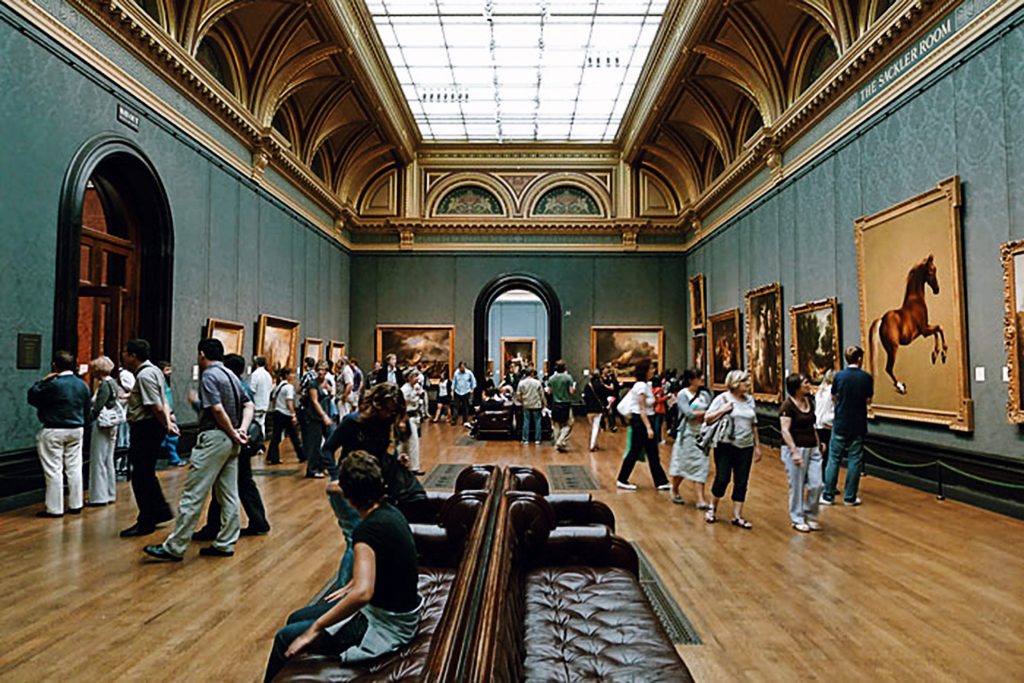 London Museums and art galleries are where history lies. They are the best places to explore and enjoy London’s culture. By exploring these museums, you can definitely find why London is regarded as the world’s capital of culture. Here is a list of the best 15 museums in London that you may visit on your London guided tours.

This is a world famous museum with a huge collection of rare and historic artifacts exhibited on the basis of its location (Asia, Ancient Egypt, Africa, Greece, Rome, and the Middle East). The major highlights at the British museum include Rosetta stone, Egyptian Mummies, and Parthenon sculptures. Besides, the entry to the museum is free.

The National Gallery is situated in the open space of crowded Trafalgar Square. By visiting the National Gallery, you can explore more than 2300 paintings from the 13th to 19th centuries. Some of the famous artworks showcased here include Sunflowers by Van Gogh, Rokeby Venus by Velasquez, and The Hay Wain by Constable.

Victoria and Albert Museum, abbreviated as V & A museum, is one of the largest art and design museums in London. With a history of more than a thousand years, this museum features an impressive collection of fashion, furniture, jewelry, theatre, architecture, etc. Victoria and Albert Museum, which is situated at South Kensington, is also regarded as the most glamorous museum in London.

Tower of London was built by William the Conqueror at the end of 1066. It also bears a tragic story of the execution of two women by their husband, Henry VIII. Throughout history, the Tower of London served as a royal residence, armory, museum, and prison. Now, it is famous as the home of crown jewels.

Tate Modern situated in a river bank was a former power station. Currently, it is a modern art gallery that house world-class paintings, photographs, and sculptures by Picasso, Rothko, Dali, and Warhol. Besides, you can enjoy a pleasant view of running river from the gallery’s cafe.

This is the place where the famous novelist Charles Dickens gave life to his novels. The author had spent his life in this Georgian townhouse from 1837 to 1839. Through the collection of more than 100, 000 objects including letters, manuscripts, and portraits exhibited here, the life of the author can be outlined.

It is one of the five branches of the Imperial War Museum. This is an underground space where Churchill had spent several hours of effort to make secret plans during the Second World War. You can also see a Transatlantic Telephone Room, where Churchill had secret conversations with the U.S. President and a Map room, which was built during the end of the war.

As the name shows, it is the historic residence of the famous architect, Sir John Soane. The museum boasts a wide collection of models and architectural drawings of Soane’s project and also a set of antiquities and paintings collected by him. Note that the entry to the museum is free of cost.

This museum situated in forest hill was designed by Charles Harrison Townsend. The Horniman museum is actually set in 16 acres of gardens and it is a magnificent sight to behold. It features an imposing collection of musical instruments, natural history, and anthropology. Undoubtedly, the Horniman Museum and Gardens is a surprising, attractive, family-friendly spot to visit.

Science museum exhibit numerous highlights from the world of science along with several interactive sessions. Entry to the museum is absolutely free, but special events and exhibitions like 3D film screenings are chargeable. One of the main attractions here is the IMAX cinema screen that is 10 times bigger than the average cinema screen.

Tate Britain is one of the famous art museums in London that holds the world’s largest collection of British art spanning from 1500 to today. It is a part of the Tate network of galleries and the works of JMW Turner are the main highlights here.

Design Museum is situated in Kensington and boasts a collection of more than 1000 objects that illustrate the 20th and 21st-century architectural designs. The permanent display collection at the museum, the Designer Maker User, offers free entry to the visitors.